Growing up in Florida, Emma Betters was fascinated by rockets and for good reason. Any time she wanted to see a space shuttle launch from NASA’s nearby Kennedy Space Center, all she had to do was sit on her front porch.

Watching those liftoffs to outer space inspired a fascination with building things at a young age.  “I wanted to know how the rocket was built and what made it do the incredible,” she said.

Thanks to an electrician grandfather who had a garage full of his own inventions, Betters found a place for her curiosity to flourish. It was there that Betters not only designed and built her own rocket, but she also gained an understanding of physics that carried through to her current career at the Department of Energy’s Oak Ridge National Laboratory as a mechanical engineer.

Betters joined the lab in 2019 as a member of the newly formed machining and machine tool research group at the Department of Energy’s Manufacturing Demonstration Facility, or MDF, at ORNL. In just a little over a year, the early career researcher is already a primary contributor to what her group leader and manufacturing colleagues are calling a moonshot initiative. It’s not powered by rockets nor meant to land on the moon, but if successful, the initiative has the potential to revolutionize the machine tool industry in the U.S.

“We’re building a machine that will change how machine tools are made in the near future,” Betters explained. “It’s a dream project.”

Machining, which has been around since the 1820s in the U.S and today is mostly automated and guided by computers, is all about precision and measurement. Accuracy matters when designing a tool that grinds, cuts, shapes and cuts the metal components that allow bigger machines, such as weaponry, vehicles and airplanes to perform critical functions.

“When assembling a machine tool, accuracy matters,” Betters said. “Alignment is one of the most important factors in a machine’s final performance. We do the best we can to ensure that the axes in a machine are straight and square to one another for precision.”

Instead of using metal casting to make the base of the tools, Betters is working with manufacturing researchers who are 3D printing molds made of additive materials like polymers and filling them with concrete. This process is expected to be a game-changer for the industry, offering a lower-cost, more efficient way to produce molds in the U.S. instead of overseas.

“By combining 3D printing and concrete in the manufacturing of machine tools we’re creating a platform that allows for flexibility in the design of the base,” Betters said. “We can put sensors in the concrete, for example, so that we can monitor temperature or vibration. This makes the machine more economical to produce because it’s tailored to meet a specific need.”

Betters anticipates working on the new machine and machining process for the near term at the lab.

“I came to ORNL and the MDF to work with my academic mentor, Tony Schmitz,” she said. “But I didn’t expect to be a part of work that could reshape an entire industry.”

After completing her bachelor’s degree in mechanical engineering from the University of Florida, Gainesville, Betters made her way to the University of North Carolina at Charlotte to complete her master’s degree.  It was there that she met Schmitz, who had developed a machine tool research center. Schmitz selected Betters to be a graduate research assistant in the center.

“I enjoyed teaching design and manufacturing at the University of Florida,” she said. “As a teaching assistant while an undergrad, I was able to teach alongside my fellow engineers and also perfect my own skills in problem-solving, computer assisted design and machining.”

While working at the graduate level, Betters learned about the MDF and ORNL. She was asked to participate in a collaborative project with the lab to design and machine an additively manufactured dynamic absorber demonstration.

“In machining, you would like to have high stiffness, resistance to deformation and high damping, or energy dissipation, so you have to measure the vibration response of the structure and use that to inform your machining parameters, spindle speed and depth of cut,” she said.

The demonstration with ORNL led Betters to consider working with a national laboratory full-time. The perfect opportunity to do just that came along when Schmitz relocated to lead machining and mechanical engineering efforts at the University of Tennessee, Knoxville, and to serve as a joint faculty appointment with ORNL to advance machine tool research.

“I’m working with the leading experts in the nation on machine tool dynamics and at the only facility dedicated to advanced manufacturing that allows me to work with industry, fellow researchers and other universities,” she said.

Betters is also a doctoral candidate in mechanical engineering at UT, where she’s slated to complete her degree within the next two years. 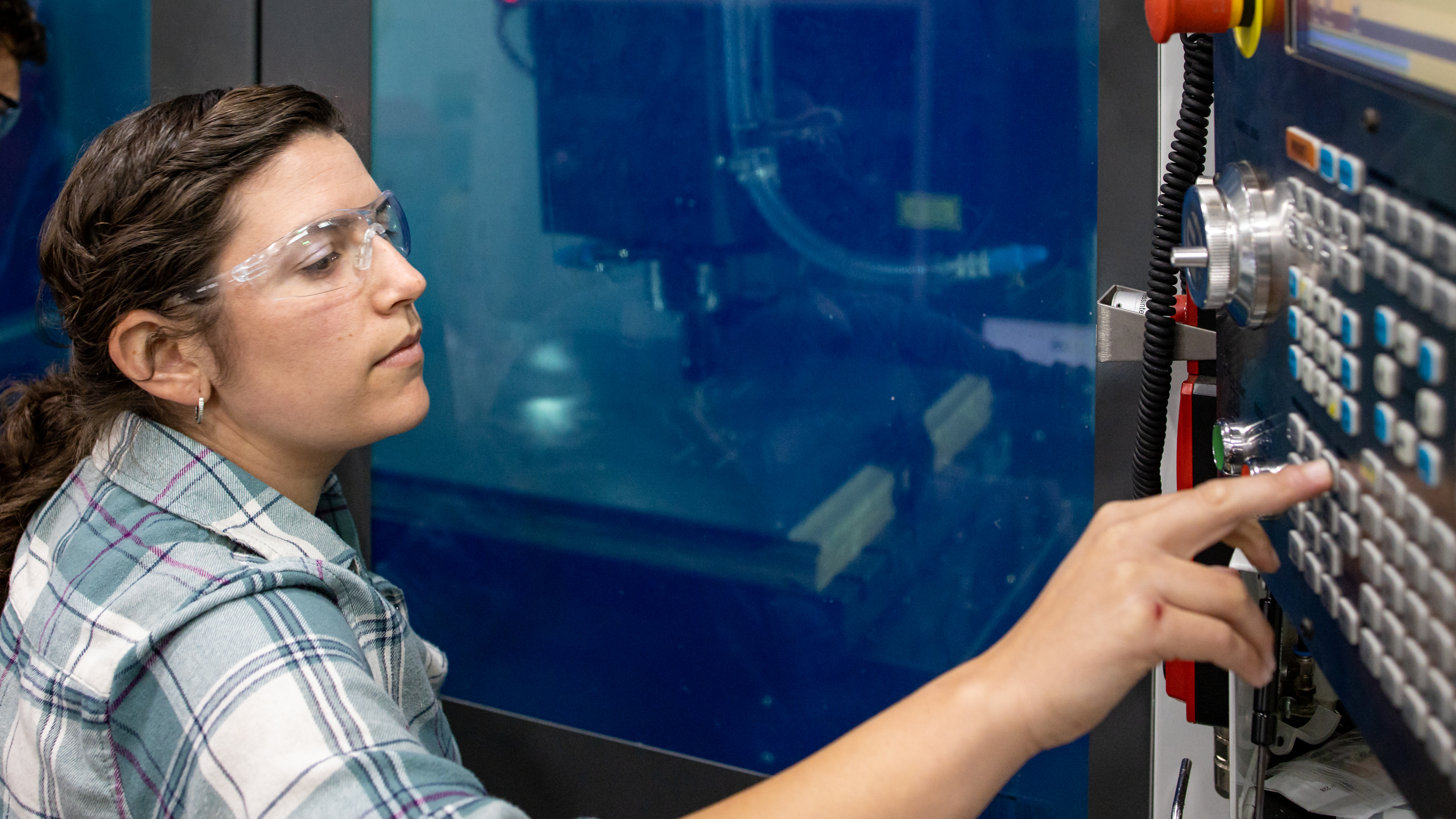 Using geometry and computer assisted design, Betters designs the tooling necessary to build machines for such projects as the electrostatic charging device which was used by industry to manufacture N95 filter material for face masks in the fight against COVID-19. Credit: Carlos Jones/Oak Ridge National Laboratory, U.S. Department of Energy.

While Betters hopes to continue supporting the lab in advancing machine tool efforts after achieving her doctorate, she said it’s the critical work she’s been performing in recent months that has truly sharpened her skills.

In late March, Betters was asked to help manufacture a device to enable an industry partner to mass produce N95 fabric material for thousands of face masks. The masks would in turn be distributed to health care workers battling COVID-19 throughout the nation.

“I didn’t know anything about how this material was produced and had never heard of the process that was needed to charge the fibers in the material so that it would block out the virus particles,” Betters said. “But within three weeks, our team was able to finalize a design for the device and machine the parts, and now that electrostatic device is on production lines.”

“There was no time for trial and error, so all my training in setup and measurement was put to the test,” she said. “It was an honor to be a part of the filter material project. I don’t know how I will top what I’ve already achieved in such a short time at ORNL, but the sky is truly the limit.”

UT-Battelle manages ORNL for DOE’s Office of Science. The single largest supporter of basic research in the physical sciences in the United States, the Office of Science is working to address some of the most pressing challenges of our time. For more information, please visit https://www.energy.gov/science.